Formation of the punk band ELEGANT in Berlin. In the same year the debut of the band´s first and only single with the " radio- friendly title ": ARSCHLOCH
(English: " Asshole ") - extreme for the standards in those days!
(Quote: Jürgen Jürgens, a former SFB II radio presenter.)
For the recording Nigel Degray AKA as " PHB Ester " (a food preservative) on bass and drums in the original line- up. 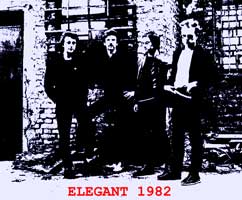 
Formation of MARQUEE MOON on New Year´s Day in 1984.
In the same year the debut of the first single: Don´t Go Out Tonight. In late autumn John Peel introduced the single on his weekly radio programme on BFBS. He decided to play the B side: Searching!
At the end of the year more debuts followed from the sampler BERLIN VISIONS - with the titles:
The Poison is Working and Candy and the Golden Flies. 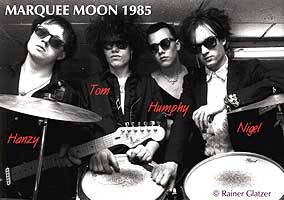 
Debut of the first Mini LP Beyond the Pale, which was produced by the Briton Will Roper.
In summer a television appearance on the WWF Club Music Convoy presented by Alan Bangs. Beside artists such as Family 5 or Chris Rea, the only live band was MARQUEE MOON.
Afterwards the band went on tour with the RAMONES! 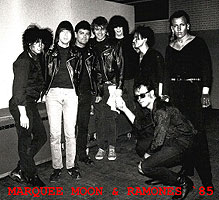 
Debut of the second LP Strangers in the Monkey Biz, as well as the Maxi single and Single Here Today and Gone Tomorrow - produced by the American Jimmi Quidd.
More concerts followed in Berlin and West Germany (Hamburg, Frankfurt, etc) with LENINGRAD SANDWICH, also friends of the band. End of the year: a performance in the Grossen Sendesaal (Great Broadcast Hall) of the SFB in the setting of a festival, which was recorded for television and radio.
A video of the title Prince of Darkness was produced by SFB for a new music series, together with a portrait and interview with the band. However, this installment was never transmitted.
Also a video of Beyond the Pale, produced for the SFB music series " 45 Fieber " was not broadcast, despite promises beforehand!


Performance at the festival celebrating Berlin´s 750th anniversary at the Victory Column, organized from SFB. Various concerts in West Germany.
In the famous " Batschkapp Club " in Frankfurt a concert was recorded for Hessischen Rundfunk (Radio in Hessen). Debut of the maxi single: Land of the Lonely.
A concert in Berlin´s „Quartier Latin“ with X MAL DEUTSCHLAND in spring and a tour in December with the legendary KINKS! 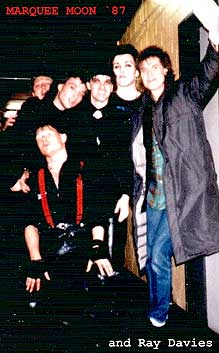 
Headliner at the first Independent Festival in Berlin- Bohnsdorf in former East Berlin. The concert was recorded for the GDR Youth Channel DT 24 and broadcast a week later.


Debut of the third LP Future Patrol for the first time as a CD, again produced by Will Roper.
The coproducer is Gerrit Meiyer, guitarist of the Berlin punk band PVC.
A tour with RED LORRY YELLOW LORRY in autumn. A video of Relentless, from the current CD was produced by Jürgen Jürgens and broadcast on a former German music channel.


During a performance by Tom Verlaine (singer of the legendary band TELEVISION) in " Quasimodo " in Berlin, Nigel along with Hanzy and the MARQUEE MOON Fan Club from Düsseldorf, handed over the LP Beyond the Pale to him when having the opportunity.
MARQUEE MOON broke up that summer.


MARQUEE MOON reformed after a three-year pause. Debut of the Angst and War CD on " Dossier Records " as a result of a big demand for the title track on the Dossier Sampler (producer: Will Roper).
Several perfomances followed.


Debut of the Desert House Mini CD, with 2 live bonus tracks recorded in Bratislava, Slovakia - and remixed by Will Roper. Tours through various European countries including Germany, as well as the famous tour " Gothic Over Europe ". 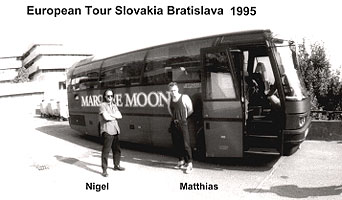 
Debut of the Best of Compilation 1985-1996 with two brand new titles!
Various concerts among others: in Berlin " Tempodrom " with the Spanish band Heroes Del Silencio and gigs at the greatest German Gothic Festival in spring and in autumn.


European tour in spring. In August the last performance at the Bizarre Festival in Cologne, beside groups such as FAITH NO MORE and MARILYN MANSON!
MARQUEE MOON even saved the show by lending FAITH NO MORE their special effect for bass! Shortly afterwards MARQUEE MOON split for good.


The US promoter Marcos G. Massarri from New Jersey made contact and expressed his interest in the already defunct band!


Contribution to the sampler Nightingale Compilation (SPV Distribution) with the project One fish two fish....
Surprising debut of the first ELEGANT LP in a strictly vinyl format by the means of the Berlin punk shop and label " Maximum Rock ´n Roll " - an initiative by Tommi Hagel!
The Tribute Compliation on the occasion of David Bowie´s 50th birthday (The Dark Side of David Bowie) was originally planned for 1997, but was almost two years belated! MARQUEE MOON´s contribution to the sampler was an exuberant cover version of Holy Holy.